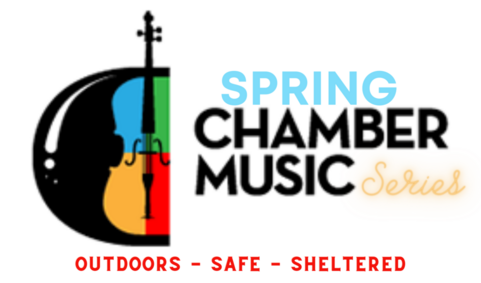 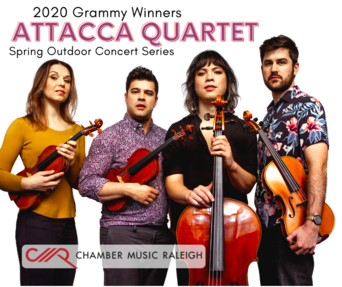 Violinist, singer and composer Caroline Shaw comes from Greenville, NC and studied at Rice Yale and Princeton University. In 2013 she was the youngest ever recipient of the Pulitzer Prize for music for her Partita for 8 Voices.

Shaw composed Entr’acte in 2011 for string quartet, revising it and in 2014 for string orchestra. It is structured like a minuet with two trios but creates a series of time warps, Classical music displaced a couple or more centuries in all directions. Shaw’s so-called “minuet” retains an appropriate Classical structure (two strains, repeated in the beginning and without repeats at the end). But then, the section veers off course into atonality and free rhythm.

The first trio explores the pizzicato capabilities of the strings, opening with a modal, “Renaissance” theme, which also careens off into another musical universe. The second trio, played bowed, follows a similar but shorter trajectory. Before returning to the minuet, Shaw interjects a transition in which the strings transform into organic voices of the natural world.

Entr’acte concludes with a long coda in the more organic soundscape.

The 25 string quartets Franz Joseph Haydn composed during the 1780s were not part of his duties as Kapellmeister to Prince Esterházy. Rather, they were self-motivated and meant for the general public. By that time Haydn’s music was all the rage throughout Europe, and it was a jewel in the Prince’s crown that such a famous and sought-after composer was in his
employ.

In 1785-86 Haydn had scored a musical coup in Paris with his six “Paris” symphonies (nos. 82-87), commissioned by a Masonic Lodge. The story goes that capitalizing on this success, he followed up with two more symphonies (nos. 88 & 89) and the two sets of three string quartets, Op. 54 & 55, the quartets dedicated to Johann Tost, violinist in the Esterháza orchestra, who left in 1788 for a stint in Paris. Hoping to have them published, and thereby more widely circulated in Paris, Haydn entrusted them Tost. The story goes that Tost was none too honest in transferring the royalties to his former boss and even tried pawning off a
symphony by one Adrian Gyrowitz as being by Haydn. Tost’s machinations, however, were in the future, and Haydn was sorry to see him leave Esterháza. Haydn was one of those composers who seldom wrote music by formula or self-borrowing – a common occurrence even among the greatest composers. Though his musical fingerprint is often immediately apparent, even when compared with the music of his contemporaries, he was always tweaking conventions. That said, he was also never one to wear his heart on his sleeve.

This Quartet, however, suggests some narrative – even autobiographical – elements that were certainly not out of character for Haydn. Although he was famous for smoothly integrating all four instruments into the string quartet, in this case, the first violin takes precedence in all four movements.

The first movement is fairly upbeat in mood, but the second movement Adagio in C minor is one of the most melancholy in Haydn’s entire oeuvre. It is almost as if he was mourning the loss of Tost, while toasting him at the same time. Moreover, its melodies are considerably more modal and ethnically Hungarian, a reminder of Tost’s nationality. On the other hand, the
attaca transitions into the Minuet, suggesting almost as if he were catching himself in amoment of self-indulgence as his musician moved on to greater things. The Trio in C minor returns to the somber mood.
​
The Finale, normally a jolly affair in Haydn’s world, begins with a protracted Adagio introduction, virtually a movement unto itself. Its major key, however, keeps it from being overly plangent. It, too, features a highly ornamented line for the first violin. Somewhere inthe middle, it suddenly and very briefly, changes tempo into what seems as if it will become a conventional Presto
rondo. But Haydn cuts it off and returns to the to the Adagio to conclude the movement. An example in music of ambiguity of feeling.

Jessie Montgomery composed Strum in 2006 for string quartet and revised it in 2012 for string orchestra for the Sphinx Organization, the Detroit-based social justice ensemble dedicated to transforming lives through the power of diversity in the arts. The work was featured on The Black Composer Speaks concert series by Fulcrum Point New Music Project, which explores different voices within the generations of Black American composers, ranging from impressionistic to pop-inspired minimalism to free jazz improv.

Complex pizzicato lines on all instruments, sometimes as complex as in a Bartok quartet, other times recalling banjo strumming, provide a rhythmic base upon which Montgomery hangs bursts of fiddle music. A review of her debut album, Strum, Music for Strings, cites Montgomery's dedication to Sphinx’s founding principles. “The album combines classical chamber music with elements of folk music, spirituals, improvisation, poetry and politics, crafting a unique and insightful new-music perspective on the cross-cultural intersections of American history.”

Montgomery is a violinist, composer and educator with a graduate degree in Composition and Multimedia from New York University. She is a member of the Catalyst Quartet, andtoured with cellist Yo-Yo Ma’s Silk Road Ensemble. She performs and composes regularly for the Sphinx Organization.

Maurice Ravel and the Paris Conservatoire never got along. His free spirit and unconventional musical ideas ran counter to the school’s conservatism. By the time he graduated in 1903, he was a well-established composer, but five attempts to win the coveted Prix de Rome came to naught, creating a scandal when it was revealed during his last attemptthat all the finalists were composition students of one professor.
​
While in his final year at the Conservatoire, he finished his first major chamber work, the String Quartet in F major, one of his most successful creations. Ravel dedicated it to his composition teacher and mentor, Gabriel Fauré. Like his older colleague Claude Debussy, Ravel was greatly influenced by the variety of music he heard at the 1889 Paris Exhibition, especially by the Javanese gamelan orchestra and performances of Russian music conducted by Nikolay Rimsky-Korsakov. The influences are reflected in the Quartet.

In outward appearance, the Quartet shows Ravel as a traditionalist. A rapid first movement with two themes in sonata form, a scherzo with a slow trio, a slow cantilena-like third movement, and a fast, stormy finale, mostly in quintuple (5/4) meter, that may have originated in Russian rhythms.

The premiere, in March 1904, brought mixed reviews. Most in the audience responded enthusiastically, but some reviewers reacted negatively, suggesting that Ravel make extensive revisions. Even Fauré had some reservations, especially about the last movement. But Debussy urged his younger colleague: “...do not touch a single note of what you have written in your quartet.”
This is a particularly interesting quartet to watch. While most composers give prominence at various times to each instrument, Ravel has a way of starting a phrase in one instrument and switching to another in midstream. The opening of the first movement provides the key to the entire Quartet. This theme will recur in numerous transformations – some obvious, some obscure – in three of the movements. And despite the fact that there is a second theme, the first one dominates the movement.

The second movement alternates between plucked and bowed playing in 3/4 and 6/8 meters (or triple against duple time) simultaneously. The pizzicato attempts to recreate the sound of the gamelan orchestra (An ensemble of mostly percussion instruments). The slow middle section with muted strings culminates in a harp-like climax before returning to a shortened
reprise of the opening section. The strings are muted in the slow third movement, with shifting tempi and fleeting theme fragments, including the opening theme from the first movement, and changing tonalities.

The stormy finale begins angrily with nervous chromatic tremolos in all four instruments that become a signature of the entire movement. There are brief respites, however, between these stormy outbursts and a calmer lyrical theme related, again, to the two themes from the first movement.
​
Program notes by:
Joseph & Elizabeth Kahn
Wordpros@mindspring.com
www.wordprosmusic.com