2.  Valerie Coleman has been racking up the accolades and was named Performance Today’s 2020 Classical Woman of the Year. Her work often gives the musical perspective of people of color, with influences from African and Cuban musical cultures. Her wind quintet piece, UMOJA—the Swahili word for “unity”—was listed by Chamber Music America as one of the “Top 101 Great American Ensemble Works.” Her Tzigane is a high-charged, passionate journey through Eastern Europe, by way of the Romani.​
3. Claude Debussy is one of the foremost French composers, and one of SLSO Music Director Stéphane Denève’s favorite composers. Debussy’s La Mer was part of the Stéphane’s opening classical concert as SLSO Music Director in 2019. An impressionist, Debussy wrote dozens of works for all types of ensembles. His Sonata for Flute, Viola, and Harp, though, was originally written for a different trio. Debussy originally wrote the Sonata with oboe instead of viola, but decided that the viola’s timbre was more favorable. Since its 1917 premiere, Debussy’s instrumentation has become a standard for chamber music.4. Gabriela Lena Frank is one of the most prominent multicultural voices in classical music today. She found influences close to home: from her mother, of Peruvian and Chinese ancestry, and father, of Lithuanian and Jewish ancestry. Winner of a Latin Grammy and nominated for Grammys as both a composer and a pianist, Frank also holds a Guggenheim Fellowship and a USA Artist Fellowship, given each year to fifty of the country’s finest artists. The SLSO’s performances of selections from Frank’s Leyendas: An Andean Walkabout are the orchestra’s first time performing music by this inspiring artist.
5.  Katherine Hoover grew up in rural West Virginia and pursued her musical studies all the way to the prestigious Eastman School of Music, studying flute and composition. In the 1950s, Hoover was the only woman in her composition classes, a fact that stuck with her throughout her career. She became involved with women's arts organizations and strove to bring the works of women composers to the public's notice. Her Reflections is a set of variations on a short sequence from an ancient Norwegian festival.
6. Jacques Ibert is an orchestral chameleon, having chosen not to ascribe to any particular genres throughout his career. Despite not attaching himself to a style, Ibert enjoyed a successful and prolific composing career, writing operas, ballets, incidental music, and works for soloists and orchestras.

7.  György Ligeti has been described as "one of the most innovative and influential among progressive figures of his time." His works span across musical categories, from opera, to organ works, to orchestral and chamber works. His Six Bagatelles for wind quintet were derived from a set of eleven pieces written for solo piano.

8.  Felix Mendelssohn, was a prodigious musician and composer, even rivaling Mozart. Between ages 12 and 14, he wrote 12 string symphonies and by age 15, had written his first symphony for full orchestra. Mendelssohn’s Octet in E-flat major—composed at age 16—remains a standard of chamber music today. The Octet reflects Mendelssohn’s youth—it is full of energy and brilliance and was described as “one of the miracles of nineteenth-century music.”
9.  Jessie Montgomery is an acclaimed composer, violinist, and educator. She is the recipient of the Leonard Bernstein Award from the ASCAP Foundation, and her works are performed frequently around the world by leading musicians and ensembles. Register Here to attend her online lecture Monday, March 8, 2021 at 6:30p.m.
10. Maurice Ravel, during the 1920s and ‘30s, was regarded by many as France’s greatest living composer. We know why—his Bolero and Daphnis et Chloé are some of the most respected orchestral works. Ravel was just as much a composer for chamber ensembles, creating almost as many works for small ensembles as he did for full orchestra. His Introduction & Allegro features harp, clarinet, flute, and string quartet, a piece commissioned in the early 1900s by the Érard Company to showcase it new double-action pedal harp.
11.  Arnold Schoenberg is often regarded as the quintessential atonal composer. In his Transfigured Night, however, his adventurous chromaticism always returns to a tonal home. The work follows the story of a Richard Dehmel poem, ultimately about acceptance, which shook audiences at its 1902 premiere.

12.  Franz Schubert lived a short 31 years, leaving behind a vast catalogue of works for voice, chamber ensembles, and orchestra. His compositions for voice often informed his other works, including his Octet in F major for winds and strings. The theme of the first movement is derived from Schubert's song The Wonderer, while the fourth movement is based on a theme from his drama, The Friends of Salamanca.

13.  Caroline Shaw is a New York-based musician—vocalist, violinist, composer, and producer—who performs in solo and collaborative projects. She was the youngest recipient of the Pulitzer Prize for Music in 2013 for her Partita for 8 Voices, written for the Grammy-winning group, Roomful of Teeth, of which she is a member. Her Entr’acte for string quartet is structured, according to a program note, “like a minuet and trio, riffing on that classical form but taking it a little further.”

14. Richard Strauss is perhaps best known for his large-scale orchestral works that fill the stage. His An Alpine Symphony, Thus Spoke Zarathustra, and A Hero’s Life are core pieces of the orchestral repertoire, but he composed nearly two dozen works for chamber orchestra, including his Sextet from Capriccio, his final opera. Capriccio allowed Strauss to look back on his professional life. For 50 years he had collaborated with poets and playwrights and theater directors, balancing his needs with theirs, balancing popular appeal with artistic integrity.

15.  Germaine Tailleferre was one of “The Six”—a consortium of French composers who worked together beginning in the 1920s. Although Tailleferre generated dozens of pieces of music, her work is often overshadowed by other members of The Six, including Arthur Honegger and Francis Poulenc. She composed her Sonata for Harp midway through her career.

16.  Pyotr Ilyich Tchaikovsky—where to start? From The Nutcracker to Symphony No. 6, “Pathetique,” Tchaikovsky is one of the most influential composers of all time. His Souvenir de Florence for string sextet is one of Tchaikovsky’s well-known works for chamber ensembles. He titled the work after visiting the famed Italian city while composing his opera The Queen of Spades.

17.  Missy Mazzoli’s music has been performed by the finest musicians across the globe. In 2018 she became one of the first two women to receive a main stage commission from the Metropolitan Opera and was nominated for a Grammy award. In Vespers, a violin leads its own shadow through an electronic hallway shimmering with bells, organ, and voices.

18. Shelley Washington is a thoroughly modern musician. The composer, performer, collaborator, and educator draws on elements from jazz, rock, and American folk, new and old. Her music confronts social injustices. Middleground is a celebration of Washington’s childhood in Missouri and Kansas. It’s a road movie in musical form, taking us in a car alongside her family and friends. 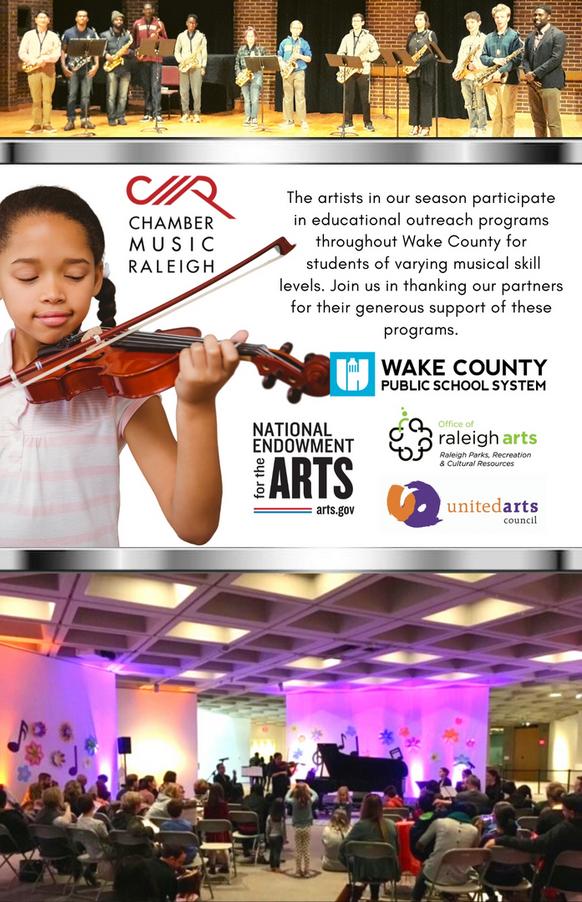 Quick Video About Our Education Partners at :

"Multiculturalism in the World of Chamber Music"

1. Samuel Barber - Samuel Barber is considered by many to be a quintessential American composer. His Adagio for Strings has retained a permanent place in the orchestral canon while his Knoxville: Summer of 1915 and Violin Concerto evoke the essence of American sound. Barber wrote only one piece just for wind instruments: his Summer Music.                                 (continued at bottom of page)

Take the Quiz! Can You Name These Composers?