Joe Kahn, pictured above with Elizabeth, marks his 50th year supporting the Guild and will present a eulogy at the start of the program. The program was in part chosen by Elizabeth during her brief illness last Fall.

ABOUT THE ARTISTS
The Mallarmé Chamber Players are a flexible ensemble of
professional musicians based in Durham, North Carolina,
whose mission is to enrich the lives of the community through
outstanding chamber music performance. The ensemble often
partners with Chamber Music Raleigh to curate special events
relating to exhibitions at the museum, and in this case,  to honor
the life of a life-long supporter to the work of this organization
​and many others throughout Raleigh. 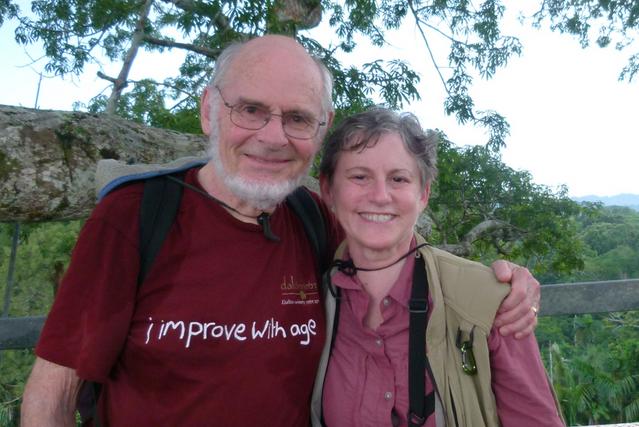 Daughter of a New York music critic, the late Paul Affelder, Elizabeth Kahn led a charmed life growing up attending any and all concerts, operas and theater free ​in critics’ seats. She majored in voice and piano at Brandeis University and continued at Brandeis as a graduate student in musicology. She transferred to Harvard University, where she received her Ph.D. in Comparative Literature, studying the relationship between music and text. Over the last 30 years she has worked with many non-profit organizations in the area, especially Chamber Music Raleigh and Arts Access. She and her husband, Joe, own Word Pros, a concert program note service. 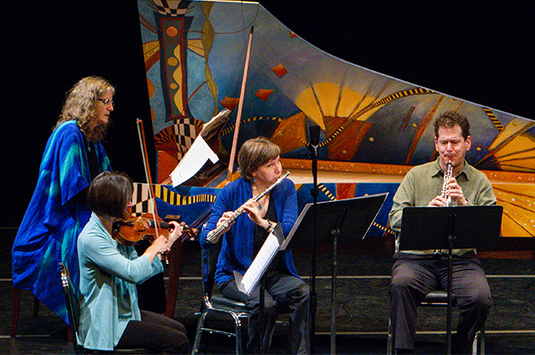 Jaren Atherholt is the Assistant Professor of Oboe at the University of North Carolina School of the Arts. She previously served as Principal Oboist of the Louisiana Philharmonic Orchestra from 2007 – 2018. Originally from Fairbanks, Alaska, Jaren left home at the age of sixteen to pursue oboe study at the Interlochen Arts Academy with Daniel Stolper. After graduating from Interlochen, she earned her bachelor’s degree in music performance from the Cleveland Institute of Music where she studied with John Mack and a master’s degree from the Shepherd School of Music at Rice University where she studied with Robert Atherholt. Prior to obtaining her position with the LPO, Jaren spent two seasons as Principal Oboist of the Sarasota Opera Orchestra. She has performed as guest Principal Oboist with the Saint Paul Chamber Orchestra, Detroit Symphony, Florida Orchestra, Syracuse Symphony and Orquesta Sinfónica de Minería in Mexico City. She has also performed as guest Associate Principal Oboist with the Pittsburgh Symphony. Jaren has been a featured concerto soloist with the LPO, Tulane University Orchestra, Spoleto Festival USA Orchestra, Washington Chamber Symphony at the Kennedy Center, and the Fairbanks Symphony.

Jaren spends her summers performing in the Grand Teton Music Festival in Jackson Hole, Wyoming and has participated in the Aspen Music Festival, Verbier Festival Orchestra, Music Academy of the West, and Spoleto Festival USA. She also previously served on the faculty of the John Mack Oboe Camp for two years, Wintergreen Music Festival and four summers as a member of the Interlochen Oboe Institutes faculty, teaching with Linda Strommen, Elaine Douvas and Daniel Stolper.

An active chamber musician, Jaren spent four summers performing in the Marlboro Music Festival. She has also performed for the Grand Teton Music Festival Winter Chamber Series, A Far Cry, and is the founder and Executive Director of Lyrica Baroque, a chamber ensemble and nonprofit organization based in New Orleans. Jaren enjoys practicing Ashtanga yoga in her free time under the guidance and instruction of Melanie Fawer. She is married to Ben Atherholt, whom she met at Rice University. Jaren and Ben enjoy spending time with their dogs, Jessie and Bes.

As a concerto soloist he has performed with the Colorado College Summer Festival Orchestra, National Repertory Orchestra, and Claremont Young Musician’s Orchestra.  Meyer gave the European premiere performance of the Sonata for Solo Violoncello by Los Angeles based composer NL Qosqadi in 2007, as well as several Boston premiers (BNMI) in 2008-2012.  A zealous chamber musician, he was the cellist of the string quartet Tetrachord, performing in New England Conservatory’s Jordan Hall in a 2009 Honors recital, and was a founding member of the Discovery Ensemble of Boston.

He holds a bachelor’s degree from the University of Southern California Thornton School of Music and a master’s degree in music from the New England Conservatory, and served a two-year fellowship at the New World Symphony.

Violinist Jeanine Wynton has performed as a soloist, chamber, and orchestral musician in major concert halls across Europe, Russia, the United States, South America, New Zealand, and Israel. Originally from Los Angeles, she began studying the violin at age two and a half with the late Suzuki pedagogue Idell Low. At age five, she was a featured performer on the television shows That’s Incredible, Real People, and Omnibus. At 10, she made her solo debut in Montevideo, Uruguay after which a critic for La Mañana magazine wrote: “She played with breathtaking technique and astounding assurance, bringing the house down…”

Since then, Wynton has been honored to win prizes in numerous competitions including the Pasadena Showcase House Instrumental Competition, MTNA (Music Teachers National Association) performance competition for the state of Indiana, Fort Wayne Philharmonic Young Artists Competition, and Artists International in New York City. In 2005, she was a semi-finalist in the Michael Hill International Violin Competition in New Zealand. She has been a featured soloist with several orchestras including the Richmond Symphony, the Binghamton Philharmonic, the Fort Wayne Philharmonic, and the Yale Philharmonia, among others.

Prior to joining the North Carolina Symphony, she was a member of The Florida Orchestra, served as Assistant Concertmaster of the Richmond Symphony and Assistant Concertmaster of the Binghamton Philharmonic, and has performed regularly with the Minnesota Orchestra since 2008. Every summer she travels to Chicago where she performs with the Grant Park Orchestra, a position she has held since 2006.

Wynton is a graduate of Yale University where she studied with Erick Friedman, Syoko Aki, and members of the Toyko String Quartet.

Suzanne Rousso was trained at the Curtis Institute of Music, The Eastman School and the New England Conservatory,earning Bachelor and Master of Music degrees in viola performance. In her early career she held orchestral positions around the country, including with the Chattanooga Symphony and Opera, The Amarillo (TX) Symphony, The New Mexico Symphony, the Spoleto Festival and the Santa Fe Opera. Early in her career, Suzanne was principal violist of the Greensboro Symphony and performed regularly with the North Carolina Symphony.

Ms. Rousso was appointed Director of Education for the North Carolina Symphony in May 1999 where she oversaw all aspects of the Symphony’s education program and in late 2006, she was appointed Director of Operations and Education of the Portland (Maine) Symphony. While in Maine she performed as a member of the Vermont Symphony, PortOpera, Opera Boston and the Portland Chamber Orchestra.
​
Suzanne returned from Maine to North Carolina in the summer of 2008 to become the Artistic Director of the Mallarmé Chamber Players, where she also performs as a violist and baroque violist. She attended the Amherst Early Music Festival in July 2012, as well as Oberlin’s Baroque Performance Institute, Tafelmusic’s Baroque Winter Institute and is a member of the North Carolina Baroque Orchestra. She is the founder and administrator for the NC HIP (historically informed performance) Music Festival that is held biennially in the Triangle.

Harpsichordist Jennifer Streeter has performed throughout the United States and Europe with acclaimed ensembles such as the North Carolina, Indianapolis, and Seattle Baroque Orchestras, Three Notch'd Road: the Charlottesville Baroque Ensemble, Raleigh Camerata, and as concerto soloist with the Monte Carlo Philharmonic and Indiana University Baroque Orchestras. In addition she has been a featured artist at the Bloomington, Magnolia Baroque and Amherst Early Music Festivals. She holds masters' degrees in harpsichord and recorder from the Early Music Institute at Indiana University, studying with Elisabeth Wright and Eva Legêne. Originally from Europe, she now calls Cary, NC home where she is a freelance musician and massage therapist.